Because time was of the essence, it was decided that helical anchor load tests would be performed as soon as practical. These tests were performed using material that was readily available and loaded to their maximum capacities.  The concept was to determine the maximum load capacities in both compression and tension utilizing material that was available quickly so the shoring could commence quickly.  Furthermore, the engineer’s intentions were to specify a means and method that could be implemented on an Emergency basis, then converted to a permit for permanent repair, this required that the material used have a current ICC ESR report.

RJG Construction Company, Inc. was contracted to perform the helical pile and tieback tests under the observation of the project Geotechnical Engineer.  The tests concluded that Ultimate loads of 45 kips could be attained using the MacLean 1 ½” RCS material with an 8”-10” lead founded into the bedrock material in both compression as well as tieback applications.

With the load test data compiled and preliminary repair designs in hand, the project engineers arranged for a meeting with the City of Torrance Department of Building & Safety.  The Torrance Building Department understood the urgency of the situation and worked closely with the project engineers so that the work of shoring could proceed very quickly, forgoing the normal 3 months +/- permitting process.

Heavier than average rainfall over an extended period triggered the soils/fill beneath this 3 story apartment structure with parking beneath to begin to creep down the slope, threatening the structure below.

The existing 3 story apartment structure included a parking area beneath the entire length of the building, with the existing West CMU wall/footing being supported on a system of grade beams and piles.  However, the piles were only 20” in diameter and 42’ deep, not sufficient to resist the lateral creep forces being applied by the moving soil materials.

When the property management firm became aware of the situation, they contacted Mr. Richard Martin with the geotechnical firm of Hamilton & Associates and Mr. John Schuricht with the structural engineering firm of Palos Verdes Engineering. Both engineers had many years of experience working together with helical piles and tieback anchors.

The underpinning and installation of steel channel whalers and tiebacks at the interior column footings was completed first, with the installation of the perimeter tiebacks at the West wall commencing immediately upon completion of the work at the interior columns.  As part of the perimeter tieback work, the Structural Engineer elected to further secure the structure by constructing a steel re-enforced concrete bond beam to completely encase the tieback anchors and retrofit brackets.  The bond beam construction not only served to secure the connection between the 85’ long tieback anchors and the existing footing, but filled in the void beneath the existing footing which was created by water seepage from beneath the structure.

A total of fourteen (14) vertical piles to depths of 45’ and forty-five (45) tieback anchors to lengths of 80’+/- were installed.  A Pengo 7K Revolution head was used to install all tiebacks and a Pengo RS 6X was used to install the vertical anchors.  Both heads were mounted to a Takeuchi 15 mini-excavator and powered by way of an RGC 2312 portable hydraulic power pack.

Advanced Support Technology, Inc., Mr. Kenneth Drake, was contacted by Palos Verdes Engineering and was requested to attend a site inspection to discuss the installation of shoring on an emergency basis. Upon arrival at the site, it was sorely obvious that time was of the essence to get the shoring installed, as stress cracks were visible in the connection of the concrete piles to the upper concrete deck in the parking area beneath the building.  The building exhibited lateral movement and settlement of the isolated concrete column footings, as well as rotation of the West wall perimeter footing and CMU Structure.

During the site meeting it was determined that the necessary scope of work would entail the vertical underpinning and tieback of the effected interior concrete column footings as well as the installation of tieback anchors to restrain the creeping West wall footing from further movement. 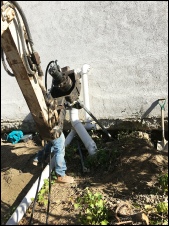 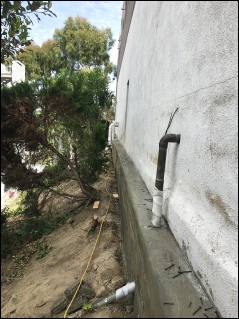 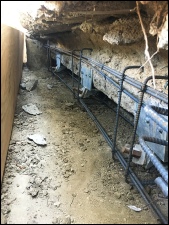 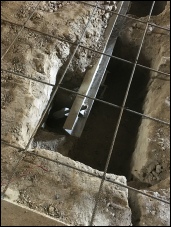 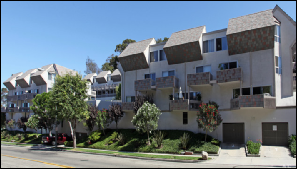