The structures were suffering the effects of both long term differential settlement into the artificial fill blanket as well as creep effects as both structures settled into the fill behind a 7’ retaining wall which separated the structures from the lower parking lot. Further, the underpinning effort needed to address lateral stability of the structures in the event of a seismic event.

The repair plans addressed all three issues utilizing helical piles and foundation retrofit brackets to underpin the tilt-up wall sections, battered anchors cast into steel reinforced concrete pads to address the seismic issue and helical tieback anchors to restrain the structures from further lateral creep toward the parking lot. All piles were installed to a depth into bedrock effectively placing all helical plates into the same bedrock layer.

The underpinning repair effort addressed two one-story commercial tilt-up structures on a single site.  Building #1 being 200 feet in length by 80 feet deep and Building #2 being 95’ wide by 80’ deep.  The original repair recommendation was intended to address long term settlement due to fill consolidation to Building #2 only, due to funding restraints.  However, the use of helical piles in lieu of conventional concrete underpinning allowed for the client to underpin both structures to depths of 25’ feet and still remain within his budget.

Maclean Civil D10 (1 3/4” RCS) Helical piles and tiebacks were installed both interior and exterior of the structures utilizing a Takeuchi 15 mini-excavator fitted with a prototype DIGGA drive powered by a portable RGC 2312 Hydraulic Power Pack.  The new DIGGA drive unit is a modified “Mini 10 K” head redesigned to provide an actual installation torque of 8,500 ft. lb. using only 2500 psi and 12 gpm.

A portable dust control room was utilized to contain the portable equipment and dust within the units as the structure was fully occupied throughout the project.  RJG installed (60) underpinning piles to depths of 25’, (12) battered piles cast in grade beams and (10) tieback anchors to lengths up to 50’.

Subsurface evaluation of the site indicated that the affected area of the structures was constructed over a blanket of artificial fill whose thickness ranged from 6.5’ to 12’ which was underlain by alluvium and colluvium over Conejo Volcanic bedrock. The artificial fill was considered as non-engineered fill because its measured in-situ relative compaction values were lower than 90 percent.  The alluvium and colluvium below the artificial fill were generally silly sands and sandy clays. Testing indicated that the soils were within the “High” expansion range based upon the measured index of 100. Groundwater was not encountered in the borings. Ph, resistivity, solvable sulfates and solvable chlorides indicated corrosion to buried metal would be “Moderately Corrosive” Hot Dipped Galvanizing helical material would be required. The project site does not lie within a potentially liquefiable zone which facilitated the use of RCS helical pile material. 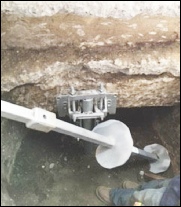 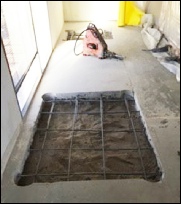 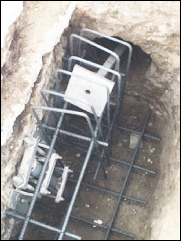 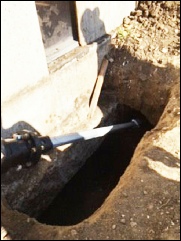 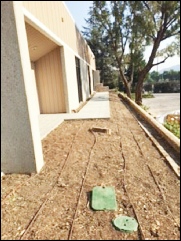 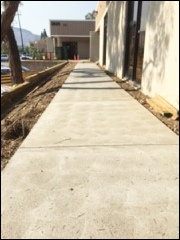 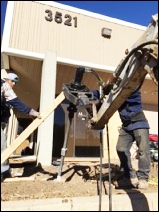